The Most Popular Rebrands of the Year (so far…)

There have been some major rebrands taking place in 2016 and we are only halfway through the year. This post is dedicated to honoring the most popular rebrands of the year as well as the evolution of branding as we know it.

I find it interesting to see how a brand evolves depending on many factors. With marketing becoming very focused on “digital”, more brands need to adapt in order to press forward. I think we will see more to come for this year. This post will grows as that happens so be sure to circle back! 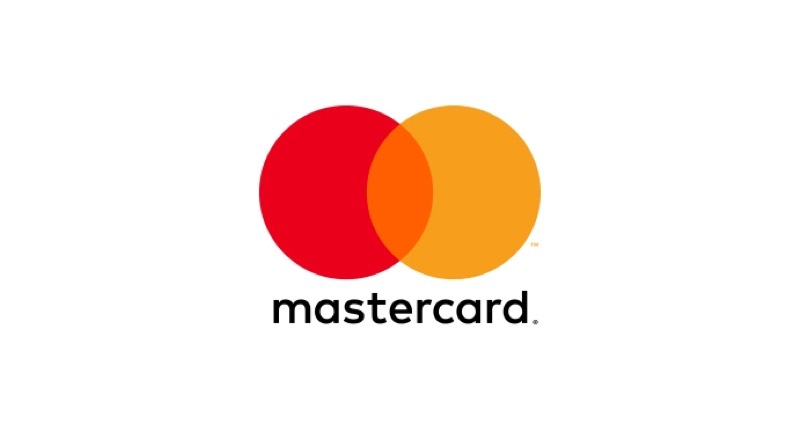 Probably the most notable and recent rebrand in the news is Mastercard. Their brandmark has been simplified, modernized and optimized for the digital world we now live in. 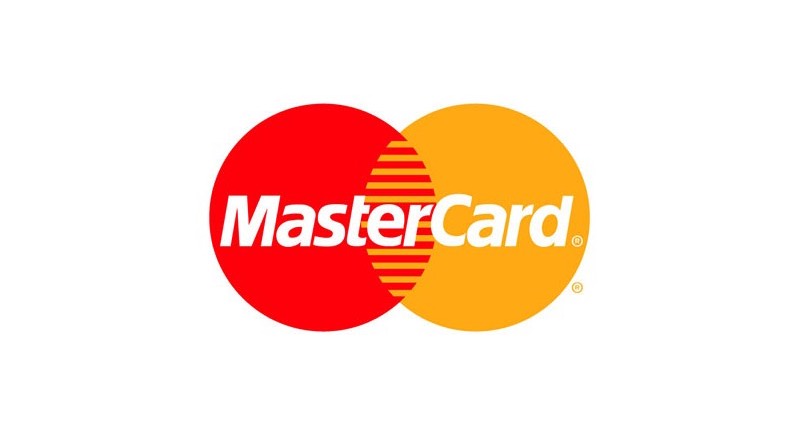 The last time Mastercard rebranded was nearly 20 years ago. The older logo featured a "comb-like” effect between the two circles; one red and one yellow. The newer logomark features an overlain approach and introduces a third color, orange in this case. The text no longer centers itself on the circles but rather below or to the site.

The team behind the new rebrand was none-other than Pentagram Design. For more details on the story behind the design process be sure to check out Pentagram’s blog post. Below I pulled out a citation that explains their general thought process and goals behind the updated brandmark to give you an idea. 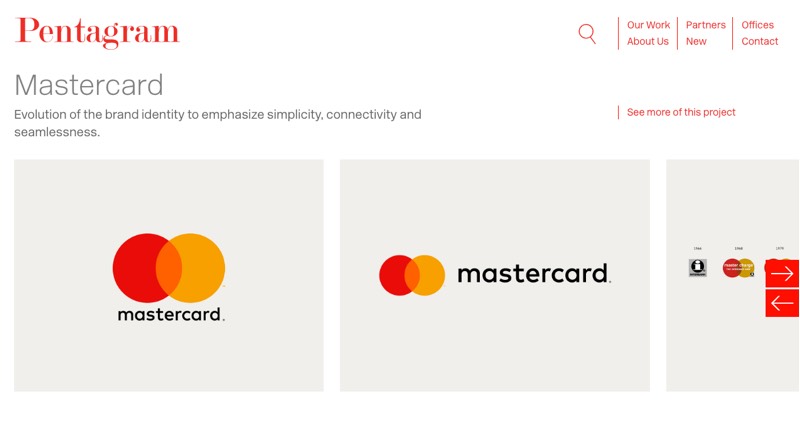 From the Pentagram Blog:

“The identity brings simplicity and clarity with an increased emphasis on the interlocking circles, and is optimized for use in digital contexts, an increasingly important part of Mastercard’s business.” 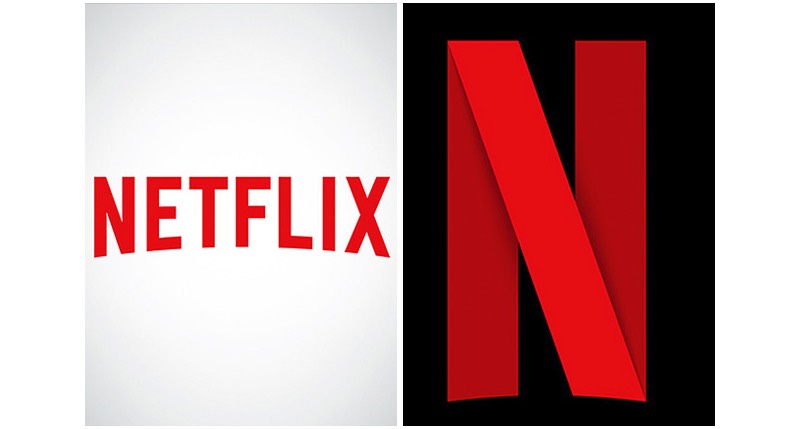 Netflix recently updated their branding to present itself as a more modern wordmark. The previous iteration featured white, shadowed letters and red backdrop of Netflix's iconic logo with a cleaner look comprised of flat red letters against a white background. Oddly enough, many people preferred the older logo from comments I read across other blogs. From what I could gather, the new logo was “too simple” in the eyes of most people, but I personally feel It works well for multiple applications which are likely a big reason for the rebrand as you can watch Netflix on nearly any device now.

Shortly after releasing the updated wordmark, a new letter mark was introduced silently. You can find this icon in several areas of the application but most notably on the application icons for all devices. It features a large “N” with subtle gradients and shadow effects giving it a 3D type of effect. This letter mark is paired with the wordmark as mentioned before. Together they almost seem contradictory due to the differences in styles. Will Netflix gravitate towards one style? We may soon find out.

Born in Dublin Ireland circa. 1759, Guinness is probably one of the most well-known beer manufacturers in the world. The beer is known for is its stout which features very rich color, and thick and intense taste. 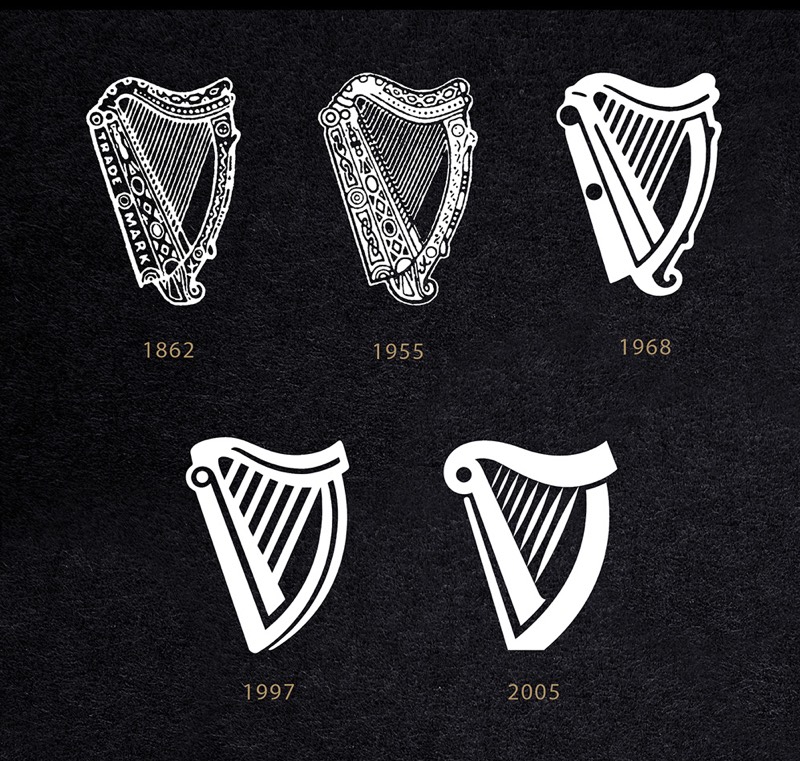 The evolution of the "harp" in Guinness's logomark.

Guinness’s logo features a harp and has done so since the mid-1800’s. As time pressed forward, more elements of the harp were subtracted from the mark leaving the iconic portion still intact.

The final logo design is beautiful!

Earlier this year (2016), Guinness teamed up with the London-based agency Design Bridge to rebrand the logo once more. The project, believe it or not, put more detail back into the mark rather than subtracting as one would expect. Rather than modernizing like most big brands, the team at Design Bridge added more detail into the mark giving it a more rustic feel. The end result is truly breathtaking. The harp now mimics the look of real metal and carvings which promote texture and contrast. A high amount of detail is down in the harp which makes connects with the big bold flavor of the famous stout Guinness is famous for. 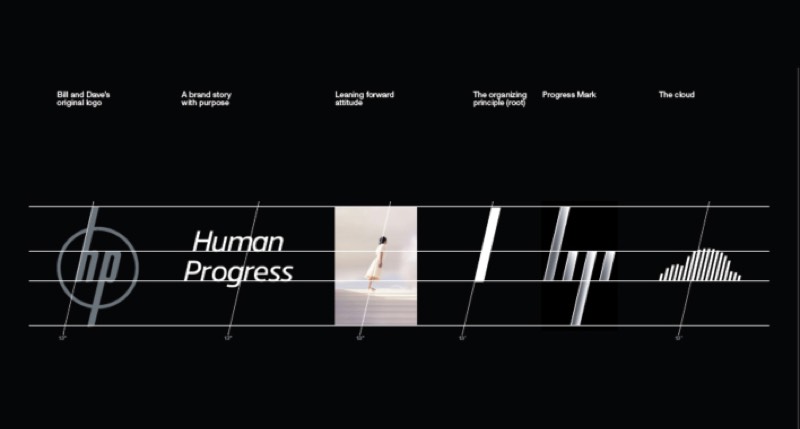 Hewlett-Packard is a technology company founded in 1939 that specializes in manufacturing products related to printing and personal computing. Being one of the leading manufacturers in personal computing equipment, HP introduced what they hope is a brand new way of portraying the company.

HP teamed with Moving Brands to help build the rebrand. The goal was to transform the world’s largest technology company into the world’s most powerful brand.

Moving Brand’s case study on the process is absolutely amazing and I highly recommend you read it over. Watch the videos and digest their thoughts and ideas. It's well worth the time.

Here’s a short clip from Moving Brands about the creative vision for HP’s new identity.

Budweiser is taking a whole new approach to its recent rebrand. The plan is to temporarily rebrand its beer as “America” until the November election is complete.

In an effort to promote more patriotism, the company set out to try and bring people together with a new look, a new purpose, and a bold campaign. Once the election is over the name “America” will be replaced with Budweiser once again. The irony here is that Budweiser, the largest American beer manufacturer in the world, is now owned by a non-American company called InBev. 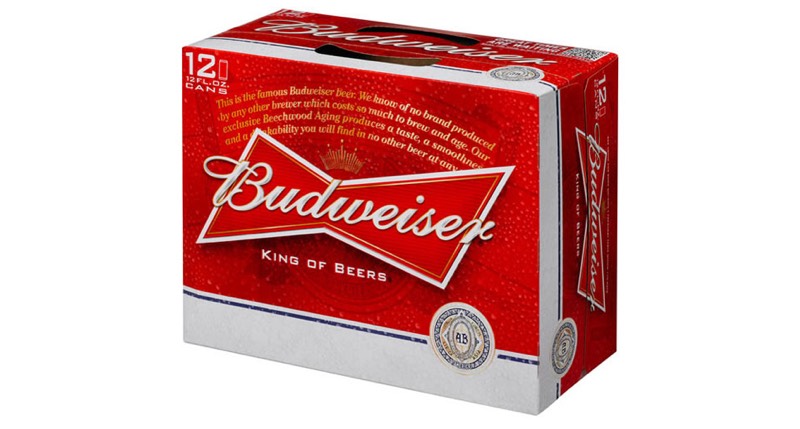 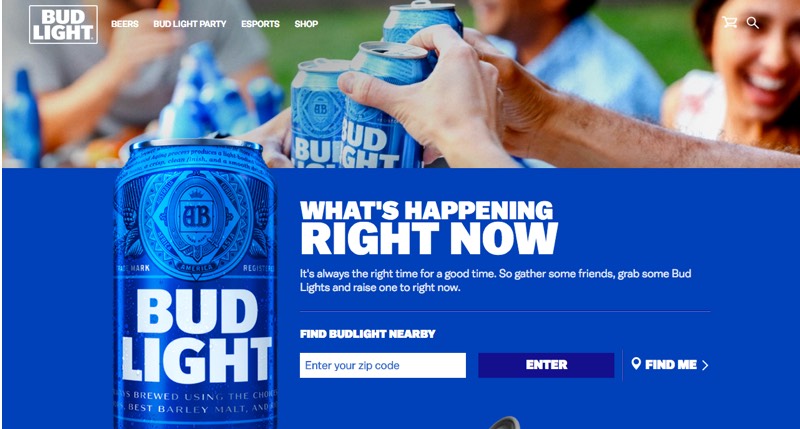 Along with Budweiser, Bud Light, a lighter beer from InBev has also undergone a bold new rebrand which I really enjoy. Its look and feel are not tied to the “America” campaign so that’s a plus . 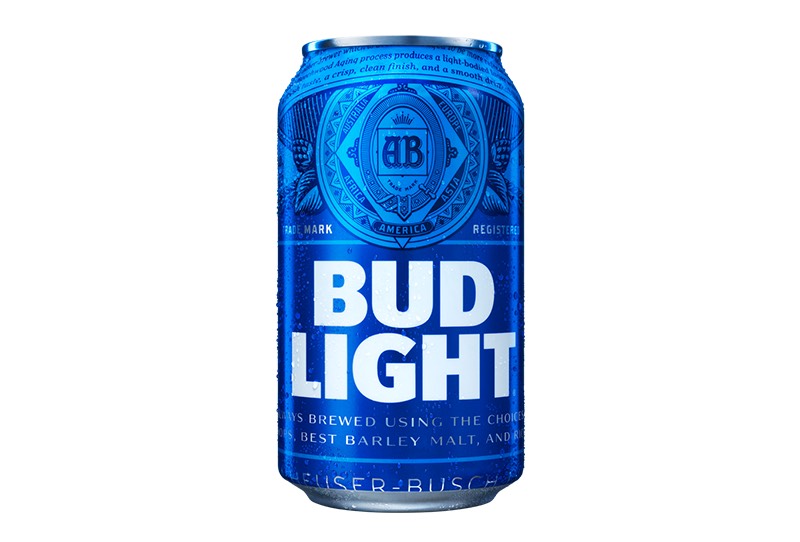 Gorgeous design that is really bold and easy to spot.
The typography is in your face, the details in the art and crests are beautiful, and you can see the dark blue cans from hundreds of feet away and know what beer it is.

“This redesign — the first major overhaul of Bud Light's visual identity in eight years — will include a reimagined Bud Light logo and contemporized primary and secondary packaging, and is part of a larger brand evolution underway at Bud Light. […] By bringing back the brewer's historic trademark "AB" crest — not used on Bud Light packaging since 2001 — the design emphasizes the attributes that established the brand as the country's most popular beer: premium ingredients, care in brewing, a crisp, clean finish, and a smooth drinkability.” 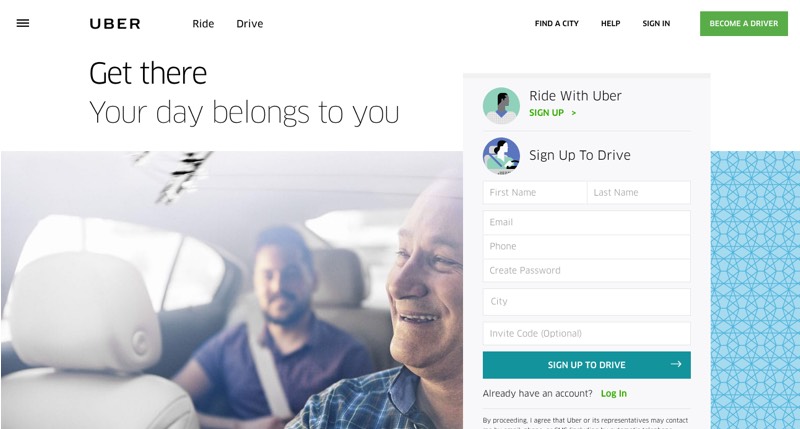 Uber got a radical facelift this year. Going from a dark and bold to light and simple is a highly summarized take on the change.

Application icons for the "rider" app and the "driver" app.

Focusing on the elements of “bits” and “atoms”, Uber uses these metaphors for the services it offers. Drivers are the “atoms” and people who need a ride are the “bits”. People who drive download a separate application to their phone while people that ride do the same. This makes the application and real-life unite to help solve problems of logistics in our modern-day world.

What started as 100 friends giving others rides in sunny California lead to worldwide adoption of the service Uber has to offer.

The rebrand tries to hone in on this complete philosophy and does so quite radically. New shapes, color palettes, different brand marks, and highly iconic language is all bundled inside the new rebrand. 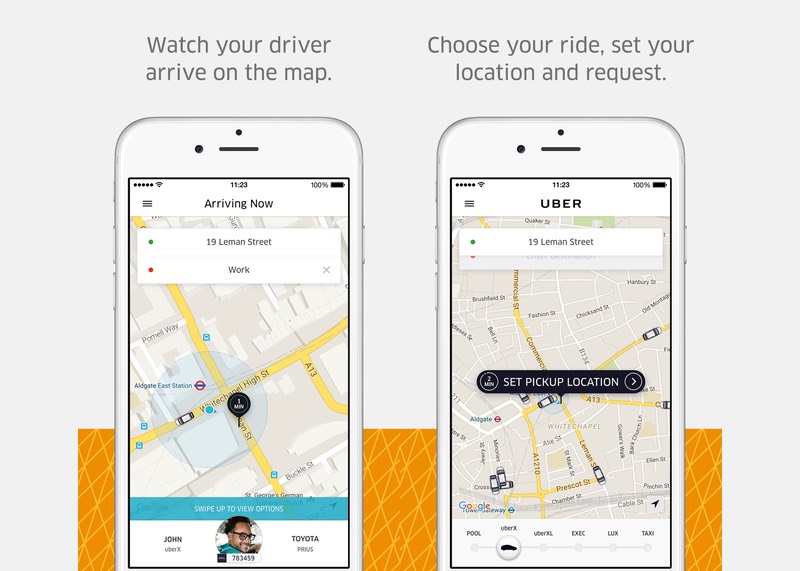 Screenshots of the uber mobile application for riders.

The application icon before and after the rebrand.

I would have to argue that the most controversial rebrand of the year is Instagram’s new application icon. I remember when this was released and the havoc that was unleashed on forums and news threads worldwide. It was interesting to witness but as with any controversial rebrand, we tend to eventually accept “What is”.

The reason for all of the controversy was first moving from a beautiful slightly skeuomorphic application icon to a flat icon with a basic gradient using the colors in the range of pinks and purples. To say the new rebrand was breathtaking was a stretch, to say the least. 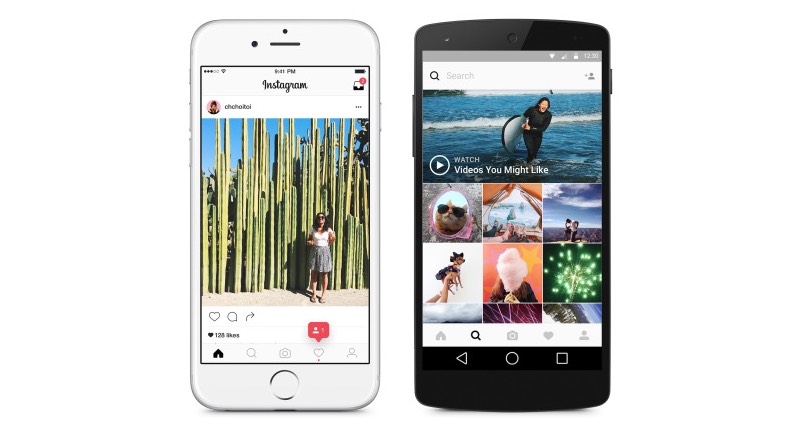 The Instagram user interface is quite nice with the switch to a monochromatic scheme. This makes the photography stand out immensely.

If you can look past the actual application icon, the application itself is really well designed. Instagram switched to a completely monochromatic interface that put more focus on the content rather than the UI. Some elements feature color but only for the call to actions that may arise during use.

Read more about the rebrand on Instagram’s blog

You can also check out this reel:

Notice: All photography is not owned or affiliated with Web-Crunch. Each rebrand and their photography is the property of their prospective owners. Don't sue me! :)