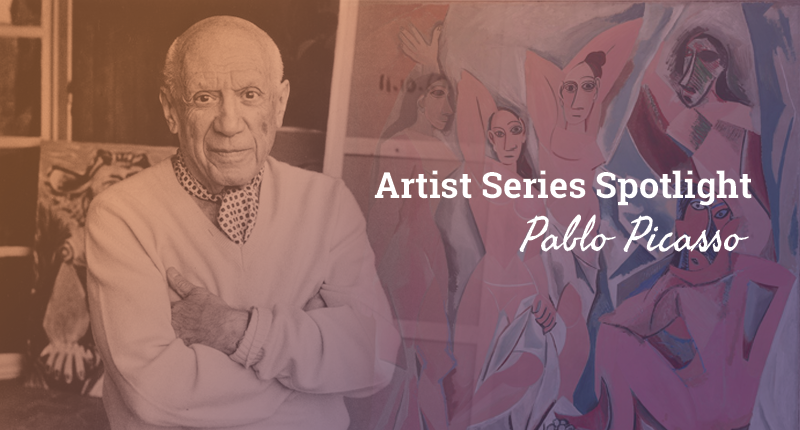 All design stems from another source. Together we as a society produce in the form of expression be it spoken, sung, crafted, or destroyed. I wanted to take some time to dive deeper within our artistry roots and uncover more about specific artists of our time. Many artists are well known for a reason, but I hope to uncover together just what is so great about their work and why we still use them as influences today in our own artwork. Join me in my artist spotlight series.

Most people know him by name but not necessarily his art. Born in Spain (1881), Picasso became well know before the age of 50 years old. Having introduced the western world to cubism in the 20th century, Picasso stands as one of the most well-known and influential artists in history. Of course, with popularity comes critics and fans. Picasso had many of both which is likely why you hear so much about him be it good or bad.

Picasso spent much of his adult life in France. During his early years, he painted in more of a realistic manner but eventually, his style changed as he began to experiment with different theories and ideas. His work is often categorized into periods. While the names of many of his later periods are debated, the most common periods of this work are:

The blue period as you can guess was a mash-up of paintings rendered in different shades of blue or green. The paintings were rather somber and expressed what seemed like a depressed sense of self.

Most of the paintings within the blue period were monochromatic (one color or shades of a single color). At the time, these works were hard for Picasso to sell even though today they are probably some of his most well-known works of art.

It was said that painting in blue and green tones was a type of mourning process for Picasso as he learned of the death of his friend Carlos Casagemas once it began. Casagemas took his own life at a cafe in Paris, France. When Picasso heard the news his work began to evolve into what we know as the blue period. Other historians believe Picasso was suffering from severe depression at the time on top of it all.

Many figures painted within the Blue Period were beggars, prostitutes, and drunks.

The rose period is characterized by a more cheery style introduced by Picasso. The depression he was suffering from may have reached a halt for the time being so as you can see in some of his work. Lighter tones of orange and pink were used. The figures inside the paintings are no longer lower class but other artists themselves, circus performers, acrobats, and more. You could tell that Picasso’s mood was more upbeat and pleasant just by the look of his paintings.

Picasso was not only a painter but a sculpture as well. He studied many different types of sculptures, some of which originated out of Africa. He began the African Influenced Period after having been inspired by traditional African masks.

The painting below was said to be the start of Picasso’s African period. The two figures on the right side appear here with African-style masks as well as a touch of the cubist style he was so famous for. 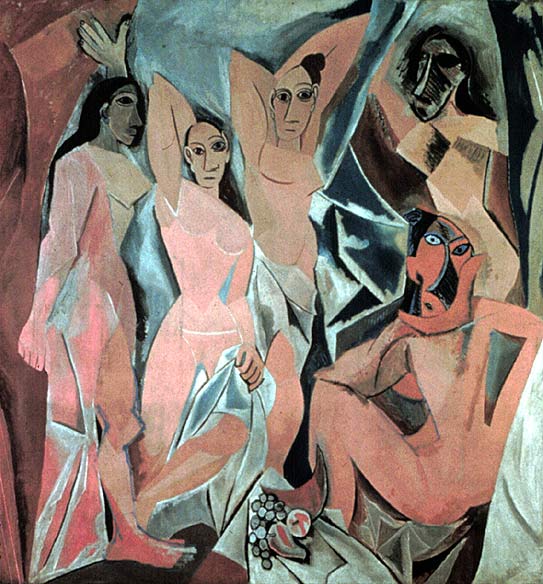 Cubism began as a simple idea but turned into a style. It is loosely based on Paul Cézanne’s three main ingredients - geometry, simultaneity(multiple views) and passage. Cubism tried to describe the fourth dimension through visuals.

Cubism is a style that is meant to depict the world as it is and not as it seemed.

Picasso became well know for the style of art in much of his work. Most people today associate cubism with Picasso.

Picasso’s Les Demoiselles d’Avignon (1907) painting incorporated this new style and it was something out of the future at the time. People were not ready for such modern work but eventually, the fact that it was so different was what granted the appeal towards him.

After centuries of trying to create realistic art, many artists sought refuge in the new expression known as Cubism. Picasso rejected the idea that art should copy nature or that it should adopt traditional perspective, modeling, and foreshortening techniques as denoted on many paintings or art pieces prior to his.

A cubist style of painting is highly identifiable due to its attention to geometric shapes and forms laid out on the canvas. Taking apart pieces of an object and reassembling them was the ultimate goal giving the onlooker a sense of another dimension no one had ever seen before. This new style led to change the way the 20th-century society views art. This style and movement have changed art as we know it and Picasso was a major contributor to the fame of the style.

Towards the end of his life, Picasso was still praised for the work he produced during his time alive. He took up sculpting once again and even entered some exhibitions gaining even more notice. Picasso died in April 1973 in France. His newly widowed wife, devastated by his death, later committed suicide in 1986. The ending for the couple wasn’t so great, but the legacy Picasso has given to our world will live within the art for time to come. The styles and pieces Picasso has contributed remain in many museums all over the world. Be sure to find and uncover your local art museum to see if his work is there. Chances are good that it might be.