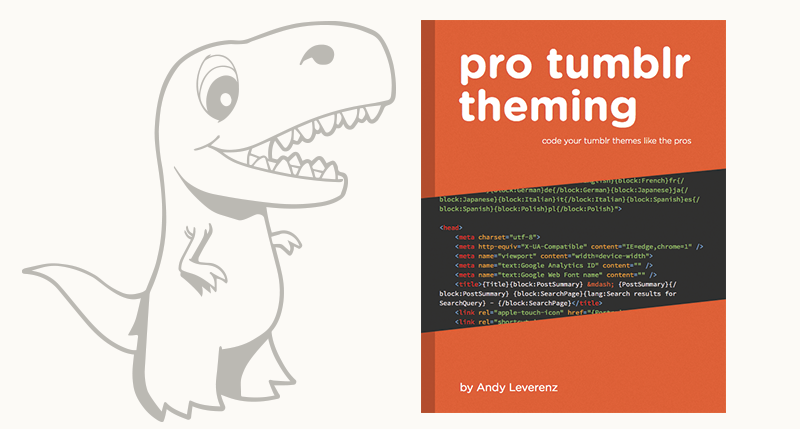 At Web-Crunch we are into trying new things. Our goal is to deliver quality content that is both useful and fun to read or watch. This week I am excited to announce the launching a new eBook titled Pro Tumblr Theming that will be a part of many future eBooks, resources, and more.

The book is a result of a blog post I wrote for another site about two years ago already. From that single blog post, I received over 40 inquiries from users around the world to help to customize their own Tumblr themes.

Some inquiries were consultant-based while others were full-blown Tumblr theme builds. My experience just goes to show how truly powerful blogging can be.

After getting a lot of inquiries I realized there isn’t a great guide out there yet for customizing Tumblr themes from scratch. Sure, there are a few tutorials and there is always the Tumblr theme documentation, but documentation is not all that fun to read. This is especially true for newcomers to HTML, CSS, JavaScript, and, of course, the Tumblr liquid type of markup itself.

I learned a lot by seeing step-by-step tutorials when I first started building websites. I think doing things the old fashion way is a great way to learn and then build upon later when you are more comfortable. There were a lot of goals for the project. To summarize, I included the most prominent ones below.

It’s free. I decided to offer this for free as I think it will help many people who are interested in customizing their own Tumblr experience. Rather than being in the dark about the process, I wanted to share it so others could benefit and I don’t think to charge someone for information that is already available is right. I’m merely trying to explain it in a way that makes more sense.

When will it be ready?

That’s a very good question. A lot of work has already been completed. Since I am doing this step-by-step, it could take some time. I’m hoping to be completed by Late 2015 or early 2016.

I invite you to lend me your email over on the Pro Tumblr Theming eBook landing page so I can notify you when the book is ready. I’ll send updates to keep you in the loop of milestones for the eBook.