Welcome to Web-Crunch CSS Crash Course where we pick up from my previously authored HTML Crash Course to build a complete resume/portfolio website from scratch.

This course is sponsored by my newest full-length course called Hello HTML + CSS. I'm currently building this course. Once it's ready for prime time I'll be sending out an invite to it to my subscriber list in advance to the general public.

This course clocks in as one of my longest screencasts to date (about 3 hours) but I hope it proves useful. CSS is a bear of a language to master. I know developers who have worked for decades building websites and software that still struggle to leverage CSS to a masterful degree.

The truth is, CSS is an open book. There are a few strict protocols to adhere to when authoring valid CSS but in terms of writing CSS at scale, there are numerous ways you can go about it. Some ways can hinder productivity, speed, and usefulness while other ways of author CSS let you move fast and provide the richest experience to end-users.

Who is this course for?

This course is for absolute beginners. If you're a seasoned pro, this might be a good refresher for you.

What's in this course

The CSS Crash Course is a continuation of my HTML Crash Course that aims at giving you a summarized view of what CSS is, how it's used, and why it's important to learn as a developer or designer.

This course is for absolute beginners. You don't need to know a thing about CSS to learn something new. I recommend familiarizing yourself with HTML prior to taking this course so you can understand how CSS depends on HTML directly.

The current core version of CSS is known as CSS3 which is what we'll be leveraging in this course. I'll expose you to both foundational features and more advanced features you can use as you become more comfortable with the language.

What we will be building

We'll be creating a resume website using HTML taken from my HTML Crash Course. The HTML Crash course gives us the foundation HTML markup that we can leverage to make a more professional looking resume website with CSS.

The first section of this course will be primarily lecture-driven which will help you understand the foundational concepts of the language before diving into actually coding something.

The final section is actually putting CSS to work. Use the video screencast during this section as your guide to building alongside me.

The old saying goes, "Rome wasn't built in a day". This also applies to anything you want to learn. In order to get better at writing CSS, you need to practice using it over and over again. Use real-world projects and fun side projects as a means to further your knowledge. Learning by doing is how developers/designers hone in on their craft. 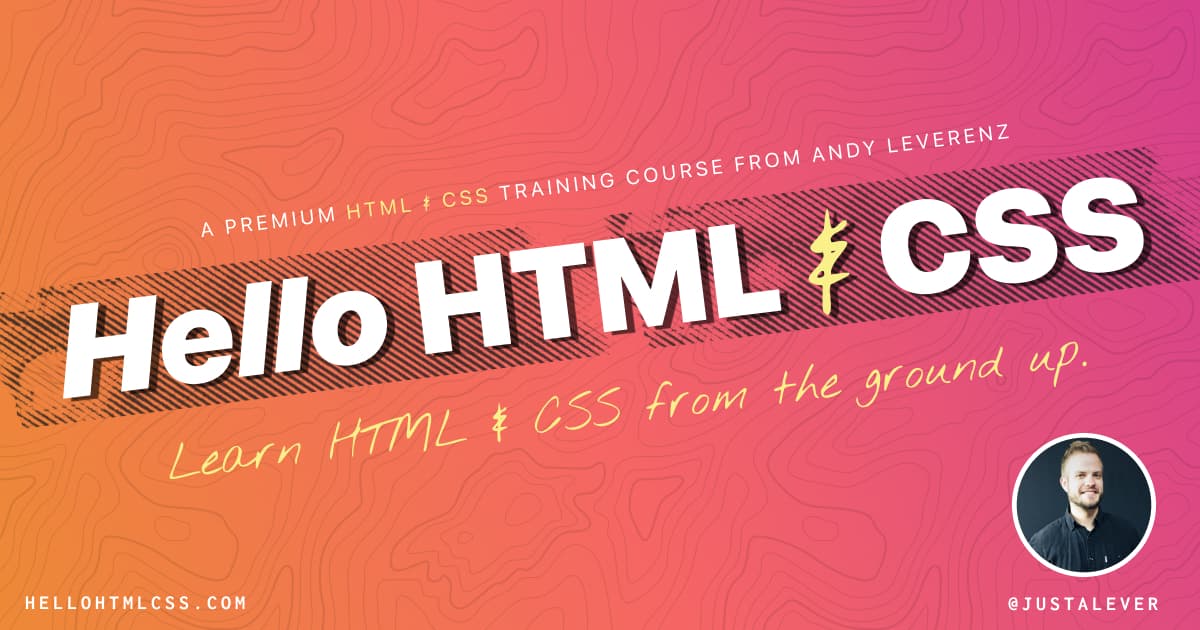 CSS – (Cascading Style Sheets) is a rule-based language at its core. You define some rules usually in groups that get applied to specific HTML elements on a web page. These elements are targeted as the web page renders.

Aside from general stylings like color, size, and shape, CSS has more advanced capabilities that allow you to animate, define dynamic properties known as CSS variables, and manipulate many elements at once.

CSS is not a programming language. You can't do conditional rendering with it but you can perform some math-based calculations for values and units.

CSS is used on virtually every website in existence. You don't need CSS but it helps increase the user experience ten-fold. Making a website easy to read and easy to use should be a primary goal.

CSS comes for free in your browser of choice. Coding CSS typically takes place in a code editor with syntax highlighting. What you use doesn't really matter so long as it enables you to code however you prefer.

The building blocks of a CSS file

All CSS files have a .css extension. You might see some with .scss or .sass. These are more advanced versions of CSS that are used outside of the scope of the course.

Just know that .scss and .sass files need to be compiled. Ultimately they get the output as .css files. .css files can run in the browser without any compilation.

A CSS file can contain various selectors that target HTML elements directly. What order you author your code matters thanks to the cascade effect of CSS.

Styles can cascade (inherit from other styles) based on their authored hierarchy and specificity.

Syntax – The style in the code is written. Every coding language shares similar glyphs for its own version of syntax though each tends to have unique characteristics that separate each from one another.

Every property and value requires a semi-colon at the end of each line ;. This signifies the end of the declaration.

There is no limit to the number of properties and values you can apply to a given selector.

How does CSS actually work?

DOM - Document Object Model
The DOM creates HTML document nodes of which we can style with CSS.

Understanding how CSS is applied

The browser will parse the HTML and create a DOM from it, then parse the CSS. Since the only rule available in the CSS has a span selector, the browser will be able to sort the CSS quickly. That will apply that rule to each one of the three <span>s, then paint the final visual representation to the screen.

What is a selector?

A selector is part of a CSS rule that targets what HTML element it will be applying styles to. A selector can target an element or many elements at the same time.

What is the CSS box model? 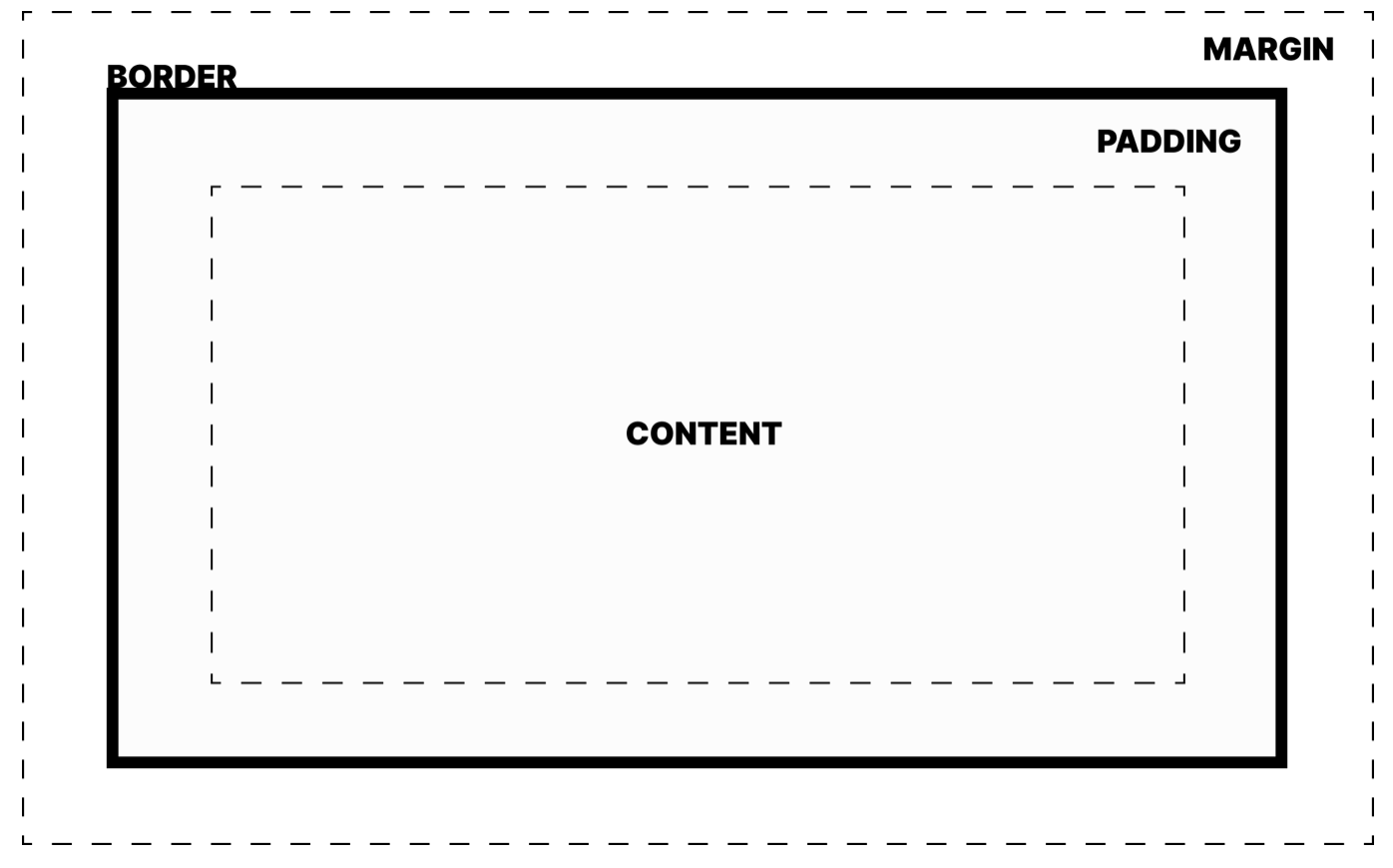 Padding box: The padding sits around the content as white space; its size can be controlled using padding and related properties.

Border box (most popular): The border-box wraps the content and any padding. Its size and style can be controlled using borders and related properties.

Margin box: The margin is the outermost layer, wrapping the content, padding, and border as whitespace between this box and other elements. Its size can be controlled using margin and related properties.

Standard box: All padding and margin are added to the content boxes existing width and height

The order of rules matters. The last rule that gets applied takes precedence when using the same selector.

Some CSS property values set on parent elements are inherited by their child elements, and some aren’t.

The width property won’t inherit to a parent’s children for example making each child have a width of an equal amount.

Lots of options with HEX and RGB being the most common.

When we complete the resume site I'll go over some popular CSS frameworks that exist today to make the process of authoring websites a little more consistent and faster to build. They are pros and cons to any approach so we'll go over those briefly.

Read more about the various styles of writing CSS to see which one might appeal most to you. As a long time front-end developer, I always reached for BEM. Up until two years ago I saw the appeal of Atomic/Functional and became hooked so that's how I write CSS today.

The last portion of this course is to actually put CSS to work and start writing it. We'll be styling a multiple page resume website with a vast array of HTML elements to consider. I'll guide you on your journey as well as share some best practices for writing more readable code that many developers call the standard. Along the way, I'll share some of my own opinions on naming conventions, organization, and more advanced CSS.

With core concepts under grasp, I invite you to follow with my screencast. We'll be extending my HTML Crash Course final project to now include fully customized CSS. You can grab the initial source code here and the final source code for this course here.

Check out my course (shameless plug!)

Part of the HTML & CSS collection